Several Bulgarian and Romanian NGOs addressed a letter to the Prime Ministers, Ministers of Foreign Affairs, Ministers of Finance and Ministers of Environment of the donor countries of the Kozloduy NPP Units 1-4 Decommissioning Program and the National Radioactive Storage Facility waste, in connection with „serious radiological safety problems of the project for the National repository of low and medium-level radioactive waste at the Kozloduy NPP site“. The letter is also addressed to the European Parliament, the European Commission, the Committee on Petitions in the EU, OLAF and Mrs Laura Kyoweshi. The following is the text of the letter. 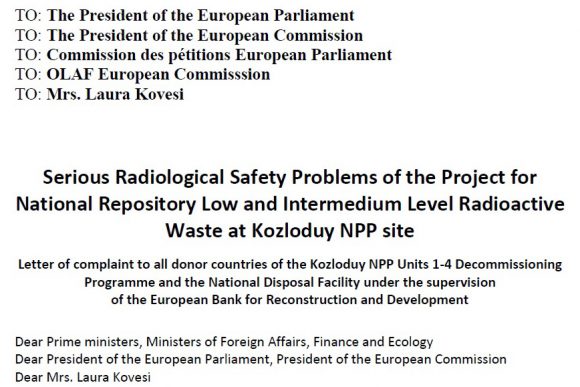 Bulgarian and Romanian citizens and NGOs

Last week in Craiova Bulgarian and Romanian citizens, experts and NGO representatives met and discussed serious radiological safety problems concerning the National RAW Repository at Kozloduy NPP site, currently under construction. 70% of the project for the National Repository for low and intermediate level short and long-lived RAW is funded by donor countries and administered by the European Bank for Reconstruction and Development. Donor countries are Austria, Belgium, Denmark, France, Greece, Ireland, the Netherlands, Spain, Switzerland, the United Kingdom and the main contributor the European Commission.

We discussed unresolved old and new issues related to the site selection, construction and radiological safety and examined documents and facts of the appeal of the first and the second EIA report before the Supreme Administrative Court in Bulgaria. When the first EIA report was completely rejected by the court, the appeal case for the second EIA report of the repository still continues before a five-member panel of the Supreme Administrative Court.

Radiana site is next to the Bulgarian Kozloduy NPP, four kilometers away from the River Danube, the state border with Romania. Work on the repository construction began in Bulgaria with a court ruling for pre-implementation, despite violations of Romanian public consultation procedures according the Espoo Convention, despite the repeatedly negative Bulgarian (95% Against in a local referendum in Kozloduy) and Romanian (15,300 protest signatures collected in Craiova) local public opinion against the project.

The highly worrying issues start with the very location of the site next to the Danube River, on nearby groundwaters and on sand soils, they go through the design of the repository, and reach to the types of radioactive waste that will be buried there. Ten are the long-lived radionuclides some of which have a half-life of several hundred thousand and even several tens of millions of years. One of the most recent problems with recurrent evidence is related to the location of groundwater very close to the site, which is absolutely unacceptable for any repository for burying radioactive waste for eternity.

With the money of the European taxpayers, you predestinate in this place – to the state border and the bank of the Danube at only 5 meters above the current underground waters, and in the tendency to shift the bed of the Danube to the south, ie. to the Radiana site, when it is known that the presence of water in the Repository causes death in the contaminated groundwater.

We also want to draw your attention to the fact that it is impossible to bury deep underground on Radiana site, because of the hydrogeological conditions there but only to the surface, which is contrary to the recommendations of the IAEA-Vienna – because of the preservation of radioactivity for thousands of millions of years of more than a third long-lived radionuclides from disposal inventory.

We also inform you that your funding is not intended for RAW only from the closed 1-4 units of the Kozloduy NPP, as experts mislead you, but at this site predetermined by your current financing, in an inappropriate place at a harmful surface for human generations RAW deployment, your funding will go to pay for the construction of the entire infrastructure for the entire Repository, adding huge new quantities of RAW from units 5 and 6 of Kozloduy NPP as well as from the planned new two nuclear units in Belene NPP and new Unit 7 in Kozloduy NPP. All these units’ RAW are included in the estimates for this repository in the current EIA report.

As legitimate representatives of the affected public, in accordance with the UN Conventions of Aarhus and Espoo,

WE WANT you to worry about the conclusion made by the independent authors of the Second EIA Report on the Radiana site: „Long-lived radionuclides will emerge with radiation in the biosphere after several hundred years”,

which is an absolute prerequisite for you to stop the funding by European taxpayers’ money on the completely inappropriate Radiana site and to continue funding after choosing another site that is far from the Danube River and is with a suitable geological structure for deep burial as recommended by the IAEA Vienna for long-lived radioactive waste. That site could be selected among the dozens recommended by the Geological Institute of the Bulgarian Academy of Sciences and by the UK and French authorities which took part in the PHARE report.

We urge you to take action to suspend funding.
Please reply as soon as possible!

(ACpV was involved in civic actions in Craiova, Romania to raise 15 300 signatures of people asking for referendum to be consulted about the radioactiv repository Radiana, the 7th Unit at NPP Kozloduy and extension of operation time of Redactor 5 and 6 illegally, ESPOO convention was not respected.)

Foundation for Agriculture and Development
President Albena Simeonova, member of the Executive board at Nuclear Transparancy
Watch