Cyber crime in Russia is booming. The number of attacks directed against Europe, the US and Russia itself is on the rise. But so far the police are no match for the hackers.

Russia is considered a haven for cyber crime. The country’s hackers are among the most professional in the world. Their tools are computers and the Internet, which they skillfully use to spy, manipulate and rob bank accounts, attack websites or send spam e-mails.

The hackers are especially versatile when it comes to stealing data. Hundreds of attacks are registered daily from Russia. More than half of those are directed against the European Union, Canada and the United States.

„They are a threat in particular to bank customers with more than 50,000 euros ($69,000) on their accounts and who use online banking,“ said Nikita Kislizin, Russian IT specialist and editor-in-chief of the magazine „Hacker.“ He said the target of such attacks were average Internet users as well as financial institutions, corporations, media organizations and even security services.

Russian hackers stole 100,000 euros from the accounts of US bank Citibank in 1994. Swedish bank Nordea was targetted and lost around one million euros in 2007. The Royal Bank of Scotland lost as much as seven million euros to hackers in 2008. And hackers are also busy attacking sites inside Russia. Most of their capers aren’t reported to the police or in the media, as most victims want to avoid public attention.

Because high-speed Internet connections are needed to carry out such activities, most of the country’s cyber criminals are said to live either in Moscow or St. Petersburg. Experts believe they are part of a highly organized back market. The hackers meet with their clients in Internet forums where services and prices can be discussed anonymously. Access to such a forum costs around $1,000 and requires a recommendation from at least three registered members.

The prices for various ‘services’ are fixed. Bringing down a website costs around $300 per day. For $400 a customer can obtain detailed data from 1,000 credit cards. Sending out a million spam e-mails costs about $200. Should a job require a special skill set, the criminals often team up.

The annual turnover associated with illegal activities is estimated at around one billion euros.

It’s said that a gang of 10 hackers can earn around 10 million euros a year. In term of the necessary technology, the investment required is only around 20,000 euros. And the hackers have reliable means of turning that dirty electronic money into clean cash.

The hackers spend at least 10 hours a day at the computer. They rarely take a weekend off. Should an attack require it, they will stay awake for days at a time. And even if they’re not working on a deal, they still have to be online and check the latest anti-virus programs to see how they can be outsmarted.

The number of cyber criminals in Russia is estimated at around 20,000. Most are between 20 and 30 years old and are graduates of the country’s technical universities.

Next to no fines

Police in Russia lack both the personnel and the technology to effectively combat the hackers. Often, the authorities are simply powerless to deal with the attacks. Only around 10 percent of the crimes are ever solved.

Also, the fight against cyber crime still isn’t being made a top priority by police in Russia. There is no countrywide databank of computer-related crimes. Journalists from abroad are generally refused interviews with the branch of the Russian police responsible for dealing with cyber crime.

Not only that, but if a hacker does happen to get caught, he can usually expect to escape with a mild sentence. Victor Pleshchuck was involved in the Bank of Scotland robbery. In September 2010 he was sentenced to six years on probation and a fine.

„If you have someone in Russia who earns more than a million dollars a year, he’s practically immune against prosecution,“ said Ilya Sachkov, head of Group-IB Cyber Crimes Investigations, the only private security company trying to hunt down the hackers.

Yevgeny Kaspersky said it was the mindset that still needed to change. „Judges in Russia just don’t get how big these crimes are – and how much money is involved.“ 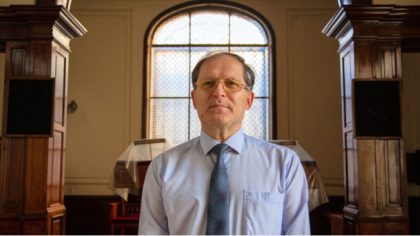