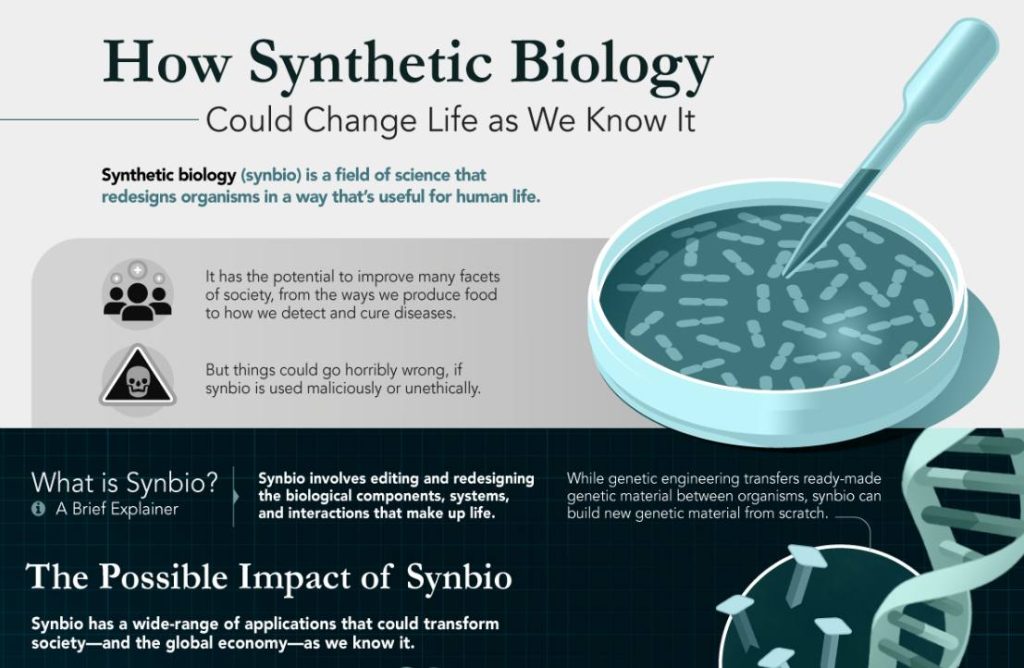 Synthetic Biology: The $3.6 Trillion Science Changing Life as We Know It

Synthetic biology (synbio) is a field of science that redesigns organisms in an effort to enhance and support human life. According to one projection, this rapidly growing field of science is expected to reach $28.8 billion in global revenue by 2026.

Although it has the potential to transform many aspects of society, things could go horribly wrong if synbio is used for malicious or unethical reasons. This infographic explores the opportunities and potential risks that this budding field of science has to offer.

What is Synthetic Biology?

We’ve covered the basics of synbio in previous work, but as a refresher, here’s a quick explanation of what synbio is and how it works.

Synbio is an area of scientific research that involves editing and redesigning different biological components and systems in various organisms.

The Opportunities of Synbio

This field of science has a plethora of real-world applications that could transform our everyday lives. A study by McKinsey found over 400 potential uses for synbio, which were broken down into four main categories:

If those potential uses become reality in the coming years, they could have a direct economic impact of up to $3.6 trillion per year by 2030-2040.

The medical and health sector is predicted to be significantly influenced by synbio, with an economic impact of up to $1.3 trillion each year by 2030-2040.

Synbio has a wide range of medical applications. For instance, it can be used to manipulate biological pathways in yeast to produce an anti-malaria treatment.

It could also enhance gene therapy. Using synbio techniques, the British biotech company Touchlight Genetics is working on a way to build synthetic DNA without the use of bacteria, which would be a game-changer for the field of gene therapy.

Synbio has the potential to make a big splash in the agricultural sector as well—up to $1.2 trillion per year by as early as 2030.

One example of this is synbio’s role in cellular agriculture, which is when meat is created from cells directly. The cost of creating lab-grown meat has decreased significantly in recent years, and because of this, various startups around the world are beginning to develop a variety of cell-based meat products.

Using synthetic biology, products could be tailored to suit an individual’s unique needs. This would be useful in fields such as genetic ancestry testing, gene therapy, and age-related skin procedures.

By 2030-2040, synthetic biology could have an economic impact on consumer products and services to the tune of up to $800 billion per year.

Synbio could also be used to boost efficiency in clean energy and biofuel production. For instance, microalgae are currently being “reprogrammed” to produce clean energy in an economically feasible way.

This, along with other material and energy improvements through synbio methods, could have a direct economic impact of up to $300 billion each year.

The Potential Risks of Synbio

While the potential economic and societal benefits of synthetic biology are vast, there are a number of risks to be aware of as well:

According to a group of scientists at the University of Edinburgh, communication between the public, synthetic biologists, and political decision-makers is crucial so that these societal and environmental risks can be mitigated. 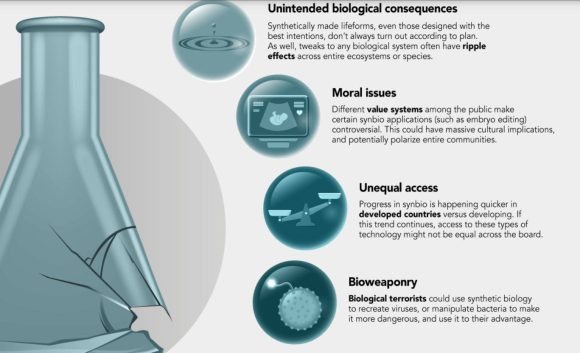 Despite the risks involved, innovation in synbio is happening at a rapid pace.

Our choices today will dictate the future of synbio, and how we navigate through this space will have a massive impact on our future—for better, or for worse. 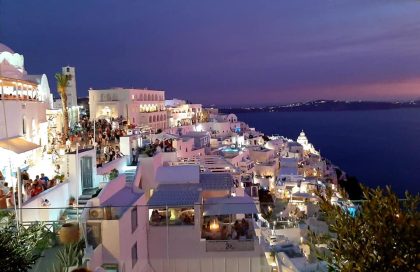 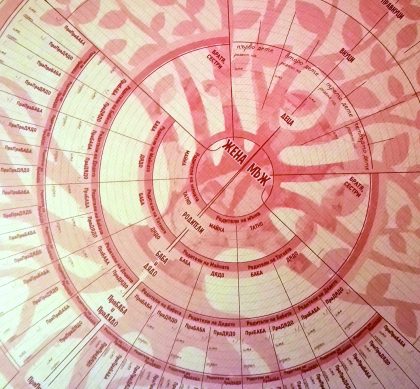