Islam’s miseries have never been America’s to solve

When President Obama entered office, he dreamed that his hope-and-change messaging and his references to his familial Islamic roots would win over the Muslim world. The soon-to-be Nobel Peace Prize laureate would make the United States liked in the Middle East. Then terrorism would decrease.
But, as with his approach to racial relations, Mr. Obama’s remedies proved worse than the original illness. 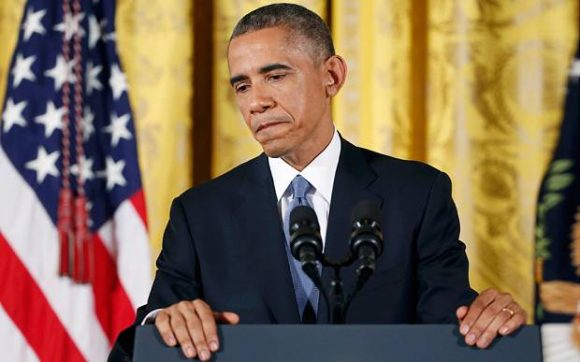 Mr. Obama gave his first presidential interview to Al Arabiya, noting that he has Muslims in his family. He implicitly blamed America’s strained relations with many Middle Eastern countries on his supposedly insensitive predecessor, George W. Bush.
The new message of the Obama administration was that the Islamic world was understandably hostile because of what America had done rather than what it represented.
Accordingly, all mention of radical Islam, and even the word “terrorism,” was airbrushed from the new administration’s vocabulary. Words to describe terrorism or the fight against it were replaced by embarrassing euphemisms like “overseas contingency operations,” “man-caused disaster” and “workplace violence.”
In apology tours and mythological speeches, Mr. Obama exaggerated Islamic history as often as he critiqued America. He backed the Muslim Brotherhood in Egypt. He pushed America away from Israel, appeased Iran, and tried to piggyback on the Arab Spring by bombing Libya. He even lectured Christians on their past pathologies dating back to the Crusades.
Yet Mr. Obama’s outreach was still interpreted by Islamists as guilt and weakness to be exploited rather than magnanimity to be reciprocated. Terrorist attacks increased. Mr. Obama blamed them on a lack of gun control or generic “violent extremism.”
Careerist toadies in government parroted the party-line message and even tried to outdo their politically correct boss.
Former Homeland Security Secretary Janet Napolitano focused on returning veterans as terrorist risks. Mr. Obama and Secretary of State John Kerry said that global warming, not the Islamic State, was the real threat. NASA Administrator Charles Bolden said the president asked him to make Muslim outreach a top priority for the agency. CIA Director John Brennan said that jihad “is a holy struggle, a legitimate tenet of Islam.” Director of National Intelligence James Clapper opined that the Muslim Brotherhood was largely secular.
The president often blamed the detention facility at Guantanamo Bay for needlessly provoking Islam. Mr. Obama said that terrorist dangers were no more deadly than falls in bathtubs. He wrote off the Islamic State as an inept jayvee squad, assuring that they posed no existential threat. He campaigned on the premise that al Qaeda was on the run. Mr. Obama pulled all troops out of Iraq, which instantly degenerated into chaos.
Mr. Obama kept insisting that guns, not Islamic terrorists, were the real danger — even as assassins used bombs from Boston to Paris, knives from California to Oklahoma, and, most recently, a truck to run over innocents in Nice, France.
Intelligence and law enforcement agencies got the message and worried more about charges of “Islamophobia” than preempting deadly terrorist attacks. Authorities had either interviewed and then ignored the Boston, Fort Hood, San Bernardino and Orlando terrorists, or they had blindly ignored their brazen social media threats.
There was never cause for such weak-horse contrition.
Radical Islam never had legitimate grievances against the West. America and Europe had welcomed in Muslim immigrants — even as Christians were persecuted and driven out of the Middle East.
Billions of dollars in American aid still flows to Islamic countries. The United States spent untold blood and treasure freeing Kuwait and later the Shiites of Iraq from Saddam Hussein. America tried to save Afghanistan from the Soviets and later from the Taliban.
For over a half-century, the West paid jacked-up prices for OPEC oil — even as the U.S. Navy protected Persian Gulf sea lanes to ensure lucrative oil profits for Gulf state monarchies.
Osama bin Laden and Ayman al-Zawahiri, the original architects of al Qaeda, were so desperate to find grievances against the West that in their written diatribes they had to invent fantasies of Jews walking in Mecca. In Michael Moore fashion, they laughably whined about America’s lack of campaign finance reform and Western culpability for global warming.
The real problem is that Islamic terrorism feeds off the self-induced failures of the Middle East. Jihadists try to convince the Arab street that returning to religious fundamentalism and exporting jihad will empower Muslims to recapture lost primacy over a decadent and guilty West, just as in the mythical glory days of the caliphate.
In truth, religious intolerance, gender apartheid, illiteracy, autocracy, statism, tribalism and religious fundamentalism all guarantee poverty, economic stagnation and scapegoating. While much of Asia and Latin America progressed through reform, the Middle East blame-gamed its miseries on affluent Western nations and on Israel.
More disturbing, millions of Middle Easterners fled to the safety of Europe and the United States — but on occasion, only to resist assimilation and show ingratitude once they got there.
In short, the dreamy Obama approach to terrorism has proved a nightmare — and it is not over yet.

• Victor Davis Hanson is a classicist and historian with the Hoover Institution at Stanford University. /www.washingtontimes.com/

1 thought on “The nightmarish results of Muslim outreach”