The starting page of the Google search engine in Bulgaria, www.google.bg, was launched in Bulgarian Cyrillic letters for May 24, Day of Slavic Script and Bulgarian Culture. 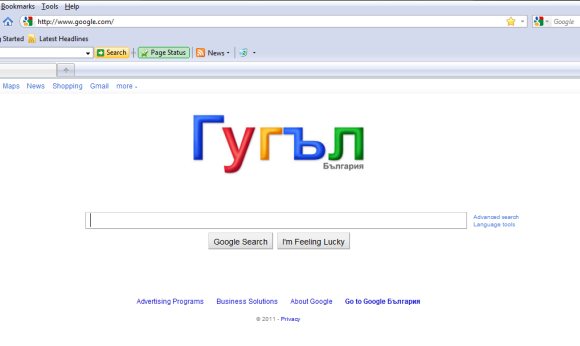 As of midnight on May 24, 2011, the Google starting page in Bulgaria has the name of the search engine written in Bulgarian Cyrillic – „Гугъл“ (see photo).

The starting page of Google is available in Cyrillic only in Bulgaria, and not in other countries using the Cyrillic alphabet such as Russia, Ukraine, Belarus, Serbia, Macedonia, which also technically mark the May 24.

May 24 is one of the two most revered Bulgarian holidays (together with Liberation Day, March 3); it is celebrated as the Day of St. Cyril and St. Methodius and their five disciples including St. Kliment.

While St. Cyril and St. Methodius were the ones who developed the first Slavic script – the Glagolitic alphabet – in Byzantium, their most renowned disciple St. Kliment, working in 9th century Bulgaria, developed a better suited version that he named Cyrillic after his teacher St. Cyril.

In Bulgaria, May 24 is celebrated as the day of script, education, science, literature, and educational spirit.

Google has made it a tradition of marking traditional Bulgarian holidays with special features of its starting search engine page. For example, on March 1, when Bulgarians celebrate their own typical holiday Baba Marta or Martenitsa, www.google.bg „wore“ a Bulgarian martenitsa.