US congresswoman Gabrielle Giffords, who was shot in the head in January, has been declared fit enough to attend her husband’s space shuttle launch.
Nasa astronaut Mark Kelly said his wife’s reaction to the doctors’ decision had been to pump her fist and say: “Awesome!”
Ms Giffords narrowly survived the shooting spree by a gunman in Tucson, Arizona, that killed six people.
Mr Kelly is commander of the Endeavour, due to lift off on Friday.
It will be one of the last space shuttle missions and the launch will be attended by President Barack Obama and other VIPs.
“I have met with her neurosurgeon and her doctors, and… they have given us permission to take her down to the launch,” Mr Kelly told CBS News. “I’m excited about that,” he added.
Ms Giffords suffered a bullet wound to her brain’s left hemisphere, which controls speech and movement for the right side of the body.
“Her personality’s 100% there,” said Mr Kelly.
“You know, it’s difficult for her to walk. The communication skills are difficult, at this point.” 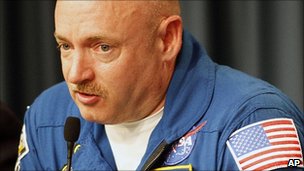 Nasa astronaut Mark Kelly Nasa astronaut Mark Kelly said he was excited by the latest news
Dong Kim, Ms Giffords’s neurosurgeon, told The Arizona Republic newspaper on Sunday that that doctors were “comfortable with her travelling”.
He said Ms Giffords was “maybe in the top 1% of patients in terms of how far she’s come, and how quickly she’s gotten there”.
“I think the question then becomes, how far is she going to go?” he said.
The Democratic congresswoman is due to undergo more surgery in May to repair a section of her skull with a cranial implant.
CBS will broadcast its full interview with Mr Kelly on Monday.
Jared Loughner, 22, has pleaded not guilty to charges relating to the attack at Ms Giffords’s constituency event in Tucson on 8 January. Thirteen other people were wounded.

Gabrielle Giffords Shot In The Head